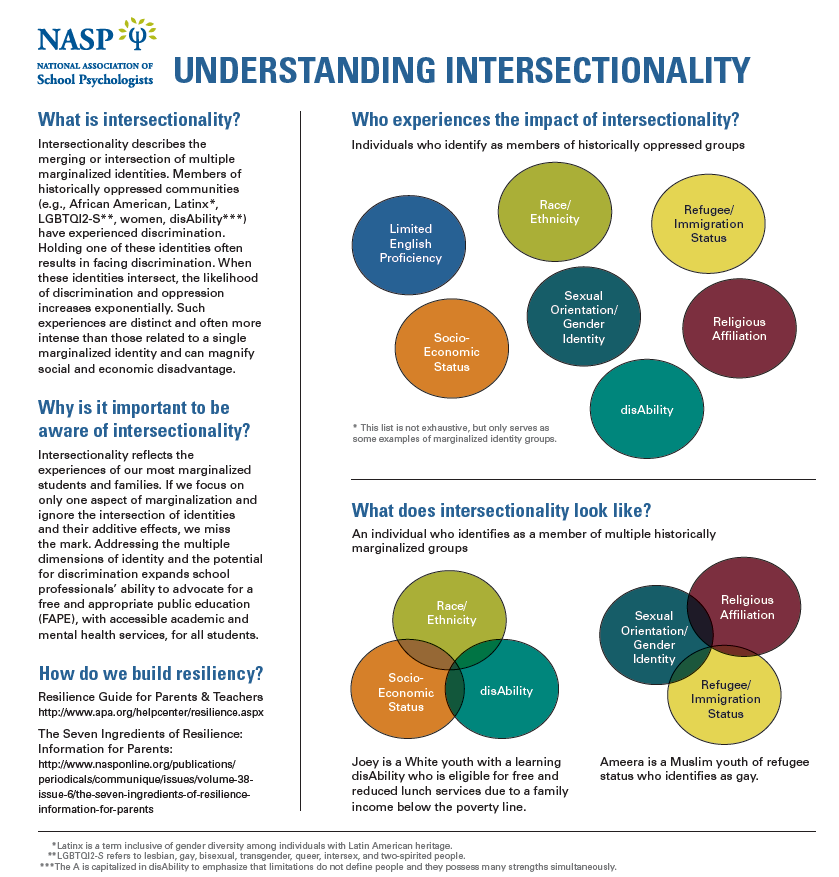 "Our experiences of the social world are shaped by our ethnicity, race, social class, gender identity, sexual orientation, and numerous other facets of social stratification. Some social locations afford privilege (e.g., being white) while others are oppressive (e.g., being poor). These various aspects of social inequality do not operate independently of each other; they interact to create interrelated systems of oppression and domination. The concept of intersectionality refers to how these various aspects of social location “intersect” to mutually constitute individuals’ lived experiences. The term itself was introduced by Kimberle Crenshaw in 1989, although intersectional understandings of the social world precede her work

Prior to being termed intersectionality, the concept of intersectional analysis emerged in a variety of contexts throughout the 1970s and 1980s....In North America, early intersectional discussion and writing was predominately the domain of racialized feminists. One of these early texts was the Combahee River Collective's 1978 statement, where the Boston-based black feminist organization described their politics as committed to considering the multidimensionality of oppression."

"Intersectionality, one of the foundational concepts within the social sciences, complicates traditional approaches toward the study of race, gender, class, and sexuality by treating these factors as interconnected variables that shape an individual's overall life experiences, rather than as isolated variables. Power, privilege, and oppression are often much more complex than has been traditionally thought, as an individual may be relatively privileged in one or more aspects of their life, while simultaneously experiencing prejudice, discrimination, or oppression stemming from other aspects of their social background or identity. Intersectionality seeks to explain how these different variables come together to shape experience, identity, and society."

The term "intersectionality" was coined by Black legal theorist Kimberlé Williams Crenshaw, in a famous 1989 essay titled "Demarginalizing the Intersection of Race and Sex: A Black Feminist Critique of Antidiscrimination Doctrine, Feminist Theory and Antiracist Politics."